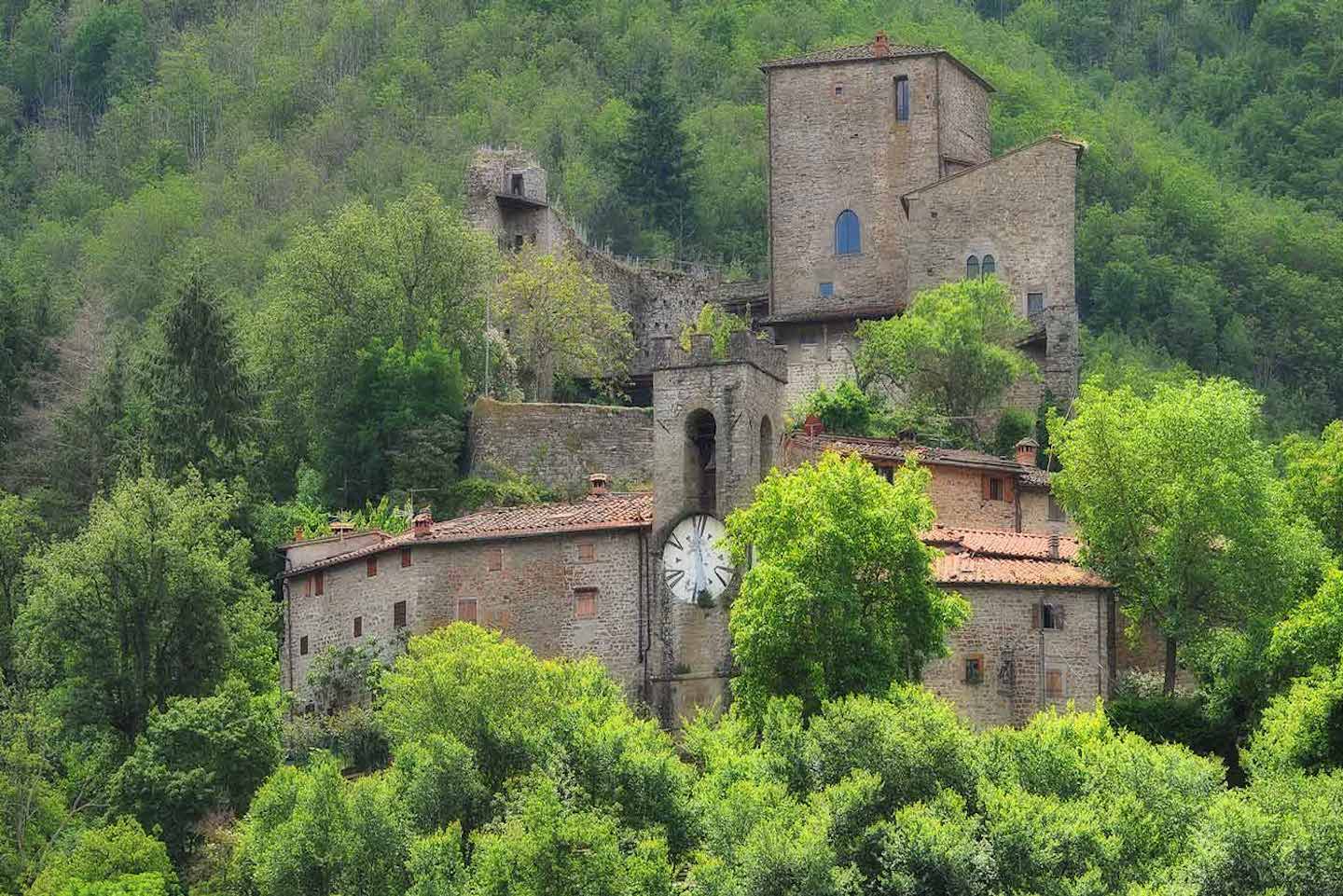 The Castle of San Niccolò, or “Corte di Vado“, first mentioned in 1029, stands on a hill overlooking the valley of the Solano stream, which flows into the Arno, on the Campaldino plain. The castle was one of the most important fortresses of the Counts Guidi da Battifolle, and its history goes hand in hand with that of the powerful feudal family of Casentino.

Galeotto dei Guidi da Battifolle was lord of the castle from 1321.

His tyranny and cruelty led the population to revolt in 1348.

The inhabitants took possession of the castle and submitted to the Republic of Florence. This made the village the capital of the new Podesteria, called ‘Montagna Fiorentina’, born from the union with Montemignaio and Battifolle.

In 1440, the castle tried to resist the siege by the troops of Niccolò Piccinino and the Guidi di Poppi. This is one of the bloodiest episodes in the history of Casentino. Anyone trying to get out of Castel San Niccolò was captured and thrown with the ”briccole” (catapults) back inside, crushing themselves. Once the castle was conquered, the inhabitants were hanged along the walls or put to the sword, in revenge for their resistance.

Following these events in 1442, the Florentine Republic decided to dismantle the castle, gradually moving the activity of the village to the foot of the fortress, around the church of San Martino a Vado.

Starting our ascent to the castle, we come across a stone bridge crossing the Solano stream, destroyed during the last war but rebuilt in its original form. This crossing or “ford” gave rise to the urban system of the castle. It is made up of three basic parts: the palace-fortress, the walled settlement and, at the height of the bridge, another small fortified village that controlled the road to the “mercatale” area.

The palace-fortress was first the residence of the Guidi counts and then of the Florentine Podestà. It is largely preserved, although the western part of the walls has been destroyed. The mighty keep, with its tower, has four large frescoed rooms inside. Its appearance is softened by two 15th-century mullioned windows and a Gothic door, which leads to the parade ground.

The excellent state of the structure is due to the restorations undertaken by the owners. The view from the east, with the keep on the left, and the curtain walls surrounding it as far as the south-east tower, is one of the most powerful images of the Casentino castles.