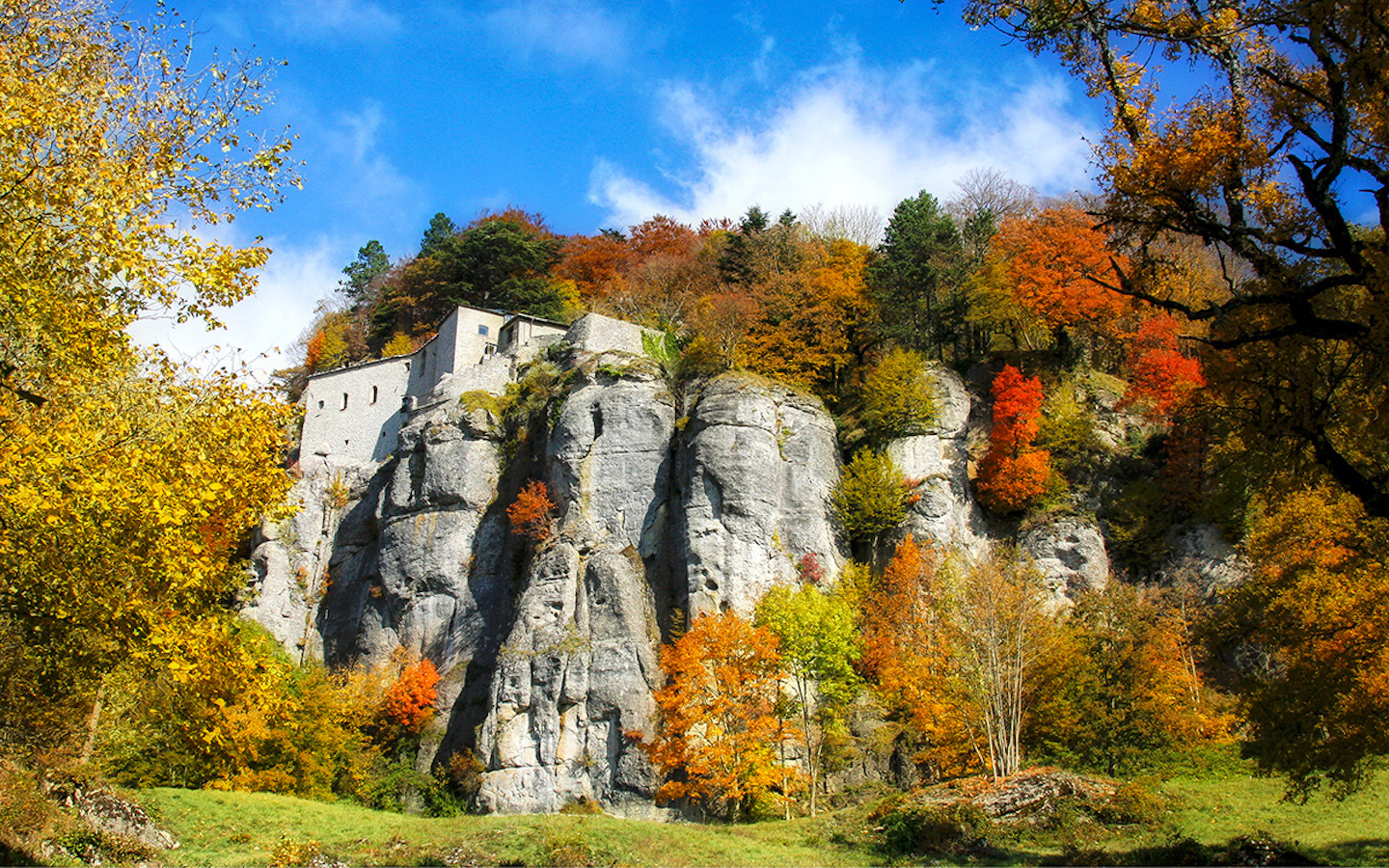 Chiusi della Verna rises at the base of the mountain where Saint Francis of Assisi received the stigmata in 1224, as recalled by Dante Alighieri in the 11th Canto of Paradise:

In the raw rock between the Tiber and Arno rivers

From Christ he took the last seal,

which his limbs bore for two years.

The “raw rock” stands out clearly and is visible from all over the valley. The charm of the place, with its limestone rocks and centuries-old plants, is made even more intense by the history of St Francis. It was in 1213, when Count Orlando de’ Cattani donated La Verna to Francis of Assisi. The Saint descended into the crevices of the rocks, having a cave as his home, choosing a hard stone as his bed.

If you come to the Sanctuary from the road of the Beccia, after crossing the arch of the Porta degli Uccelli, you will come across the small church of Santa Maria degli Angeli, the first to be built on this site, where Count Orlando has his tomb. Behind this, on the “quadrante” (a splendid terrace overlooking the Casentino), stands the basilica of Santa Maria Assunta, the main church, which houses splendid terracottas of the Della Robbia school. It is impossible not to mention the Chapel of the Stigmata, built on the spot where the miracle took place and decorated with the largest Della Robbia sculpture ever made; or the Sasso Spicco, a gigantic crevice in the rock where Francis used to go to pray, which can be reached by means of an evocative staircase carved in stone.

In the centre of Chiusi, below the sanctuary, are the Castello dei Cattani, the church of San Michele Arcangelo and the Podesteria (“mayor’s house”). In 1385, the town passed to the Republic of Florence, becoming the capital of a civil jurisdiction in which a podestà resided.

The first Podesteria  in Chiusi was to the west of the castle. Michelangelo’s father, Ludovico Buonarroti, was its podestà in 1475, the highest civil authority at the time. The link between the Buonarroti family and this place is also highlighted by recent research that has identified the landscape of Chiusi della Verna in four of Michelangelo’s works (The Creation of Adam, The Tondo Doni, The Crucifixion of St. Peter and The Conversion of St. Paul). Later, the podesteria underwent alterations, as evidenced by the inscription on a lintel that dates the building to 1702.

The Vallesanta valley, dotted with many small, stony villages, is well worth discovering. These include Rimbocchi, famous for the bread that is most loved by the people of Casentino, and Corezzo, home of tortello alla lastra, another gastronomic excellence of the area.

Also within the municipality of Chiusi della Verna, we would like to mention the small village of Sarna, which, after careful restoration work, now offers visitors the charm of a medieval atmosphere with its castle.